There is a widespread but generally false belief that increasing the number of megapixels in a digital camera sensor design will necessarily worsen the sensor's performance at capturing low-light scenes at high ISOs.

Why do people mistakenly believe that denser sensors struggle more in low light?

...because people compare cameras by viewing their files at 100% on screen. This is a false comparison which heavily favours the noise performance of the lower resolution file. The larger file is being examined at higher magnification, and therefore more harshly. The higher resolution file has actually been blown up to a larger size in such comparisons. You would immediately see this if your monitor was larger than the image size, but nobody uses a monitor that large.

To do a real comparison you need to consider what the two files look like when they are enlarged to the same physical size. That's easy to do: simply print out a print of the same size from each camera. Alternatively, simply uprez the lower density file to the same pixel dimensions as the higher density file and then compare them on screen at 100%. Some people think that uprezzing damages the file, but there is no justification for that belief - it is demonstrably false. They are concerned with preserving the shape of the pixel grid, but that level of information is irrelevant since nobody prints hoping to see the squareness of his pixels. Go ahead and uprez the smaller file to the bigger file's size, and that will allow you fairly to compare the two files on screen at 100%. The apparent noise advantage of the less dense file typically disappears because it was an illusion. You can also interpolate the larger file down to the dimensions of the smaller to make a comparison, although don't forget that some of the larger file's detail is thrown away by this method. At equal magnification on screen, the comparison is fair, and is just as good a comparison as making two equal sized prints.

Unfortunately many review web sites fail to compare cameras properly for exactly this reason. They compare 100% crops, and so are effectively comparing the amount of noise per pixel, even when those pixels represent different fractions of the total image. That is an entirely broken and unfair method of comparison, and you can see wrong conclusions being drawn from it, and mass deception, at sites like DPReview and DXOMark. For example, here are the comparitive noise crops from DPReview for the Nikon D3 and D3x:

The first thing you will notice about these two crops is that the D3x on the right has worse grain than the D3. However, if you look at the size of the Queen's head on the postage stamp you will notice that the stamp is much bigger on the D3x crop. That's because at 100%, it's more magnified. The D3x grain pattern is therefore also more enlarged, and so it should be clear that this is no way to judge noise/grain and image detail between two cameras. We are effectively trying to compare grain samples from an A5 print and an A4 print. Any image looks steadily worse the more you enlarge it, so looking for fine detail in an A4 print from one camera and an A5 print from another is no way to make a like-for-like comparison.

This is what the D3 and D3x crops look like at equal magnification:

In this case the D3x looks the equal of the D3 at 6400, which it is. If you do equal-sized prints from the two cameras you will not find that DPReview's noise comparison is right, you will find that this one is. Yes - DPReview, and your monitor have indeed been lying to you for years.

You can avoid being deceived by this broken method of comparison by ignoring all per pixel comparisons, that is, all comparisons where 100% crops are assessed without first ensuring that the images from different cameras contained the same number of pixels as the densest file.

You can also help to level the playing field by voting with your wallet for cameras which have more pixels in conjunction with great near-dark performance, happy in the knowledge that sites that fail to understand this issue aren't going to mislead you.

The main reason why denser sensors aren't noisier is that in modern sensors the gaps between each sensor site ('sensel') have been minimised to a level where their effect on output is negligible. As a result, the sensels effectively cover the entire sensor area, regardless of how many or few of them there are. Consequently the light-gathering power of the sensor is entirely dependent on its surface area, and very nearly independent of how finely that surface area is divided up.

The noise of reading the dearth of photons striking the sensor in near darkness is fairly random, and therefore it averages out to nothing over a large number of pixels. Imagine 10 Mpixel and 40 Mpixel sensors of the same size. Each sensel on the 10 Mpixel sensor will take up the same area as four sensels in the 40 Mpixel sensor, and each sensel from the 40 Mpixel sensor will be a quarter the size of the sensels on the less dense sensor. The four smaller sensels will be noisier, individually, than the one large sensel. Let's say for the sake of argument that they are each four times noisier. However, in producing a 'downrezzed' 10 Mpixel image from the 40 Mpixel sensor, the values of the four small sensels are averaged together, and the variation of their noise averages out between the four. Each sensel may be four times noisier than the larger sensel, but once averaged together, the value of the composite four-in-one sensel will be no noisier than the larger sensel. In this model, while noise varies per sensel as sensel size changes, the noise per square millimetre of sensor doesn't change. That applies to pixels in the final image too. In any given area of the final image, read noise does not vary significantly with density of sensels.

Why are the very dense sensors in point & shoot cameras so poor in low light then?

Because they are really small. The smaller a sensor is, the less light it captures, and therefore the noisier the image will be. Note that the same argument doesn't apply to sensels: smaller sensels don't make a picture noisier, smaller sensors do. 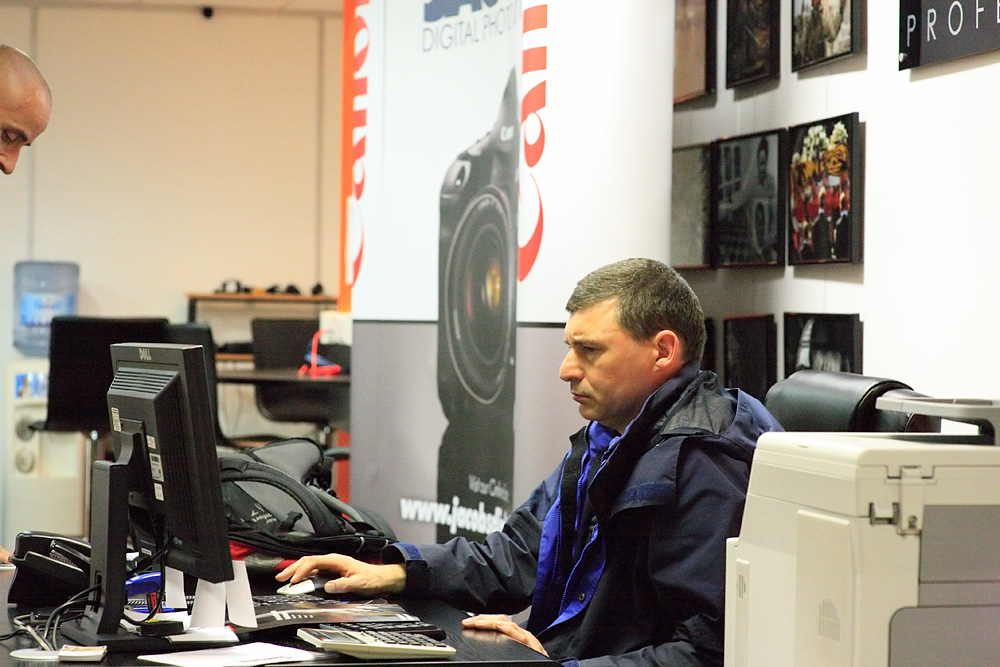 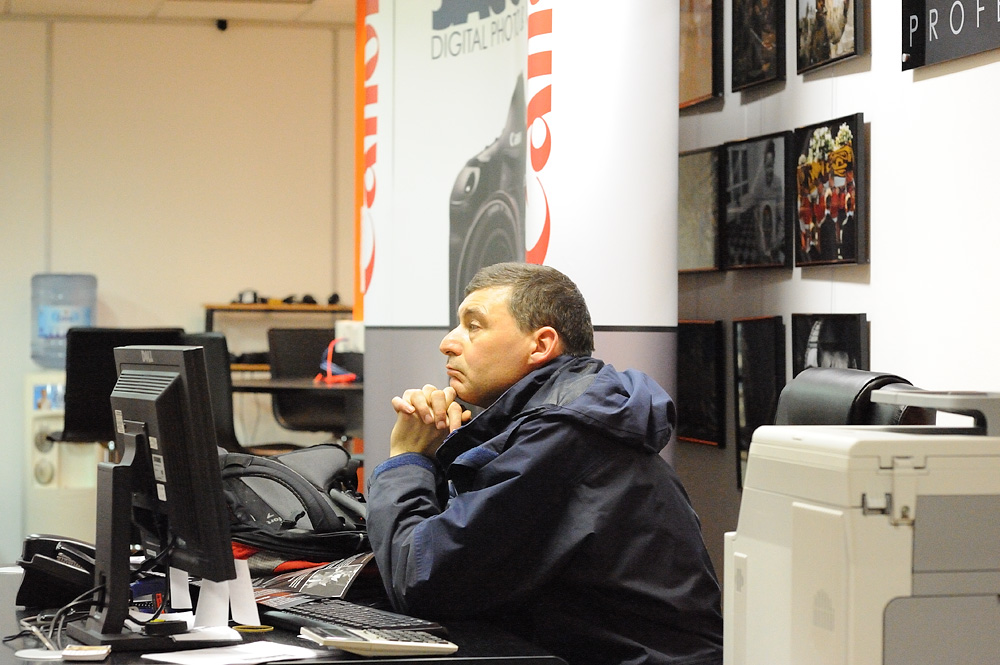 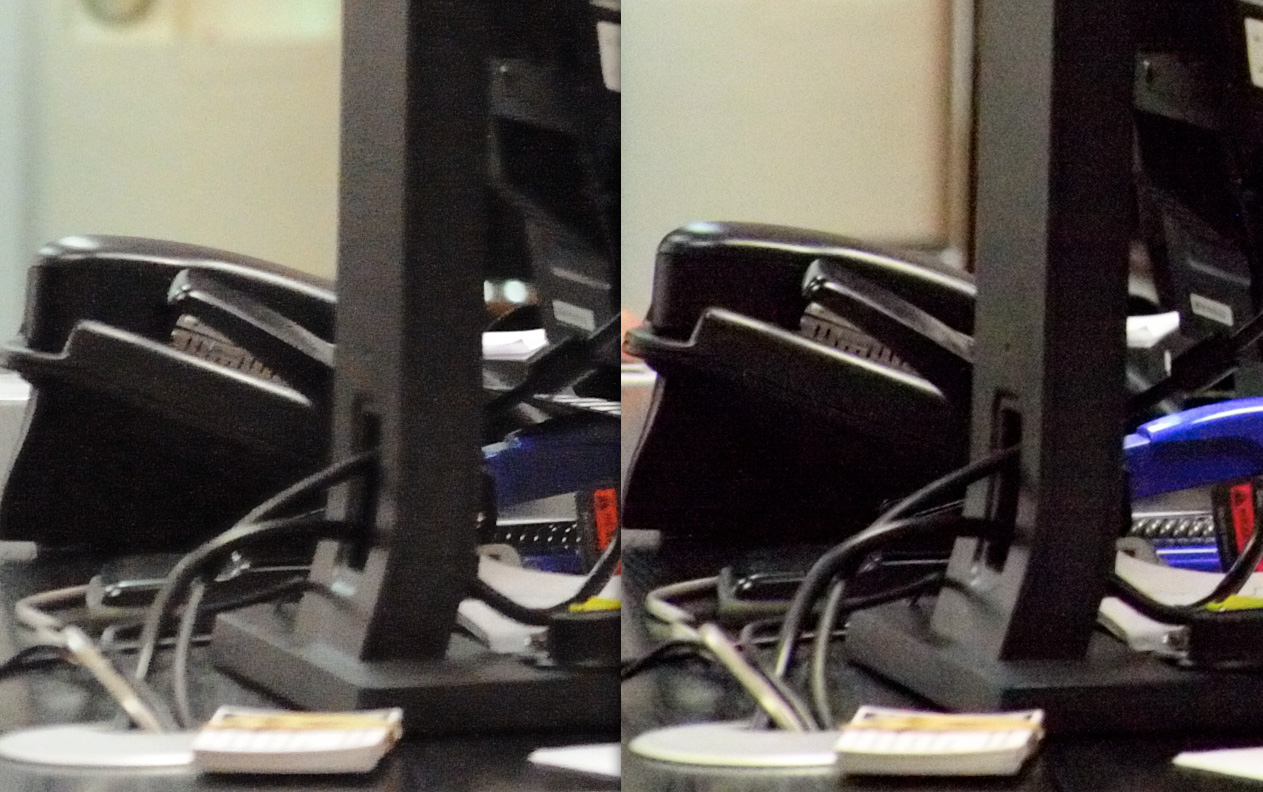 Here is a 100% crop from the files without any noise reduction applied: 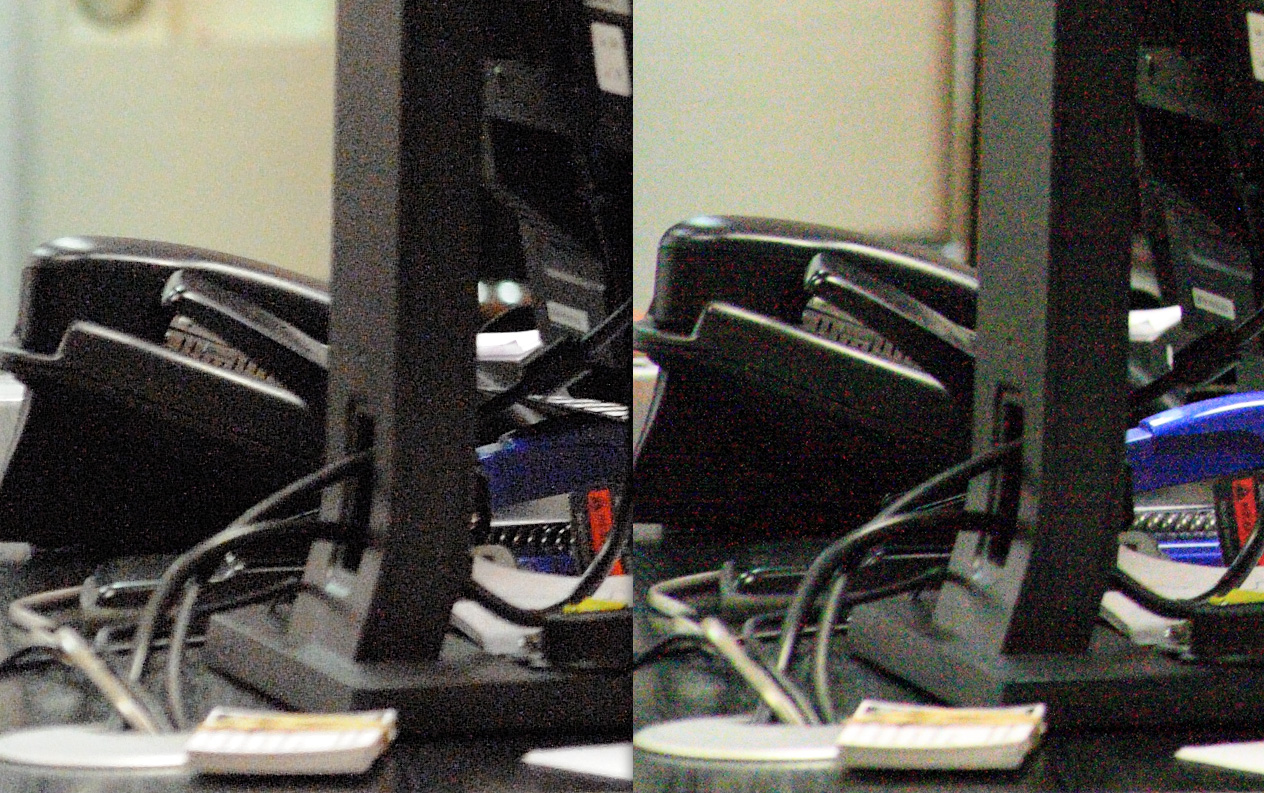 I think it is fairly plain to see that while each camera produces different noise patterns, once sensible noise reduction has been applied, as it probably should be with a 12800 ISO file, there is very little to choose between them.

Once again, let me make this clear: people and reviewers perceive the D700 to be far better at high ISO settings than the 1Ds Mk III not because it is, but because they examine the two cameras' files at 100%. Since the 1Ds Mk III file is far more magnified at 100%, it looks worse than the D700 at 100%, even though they actually have equivalent performance.

Why don't cameras like the 1Ds Mk III and D3x have very high ISO settings?

I don't know, but here are some possible reasons:

Here are a couple of images taken at 12800 ISO on a Canon 1Ds Mk III even though it doesn't have that setting (these shots were deliberately underexposed and then push processed): 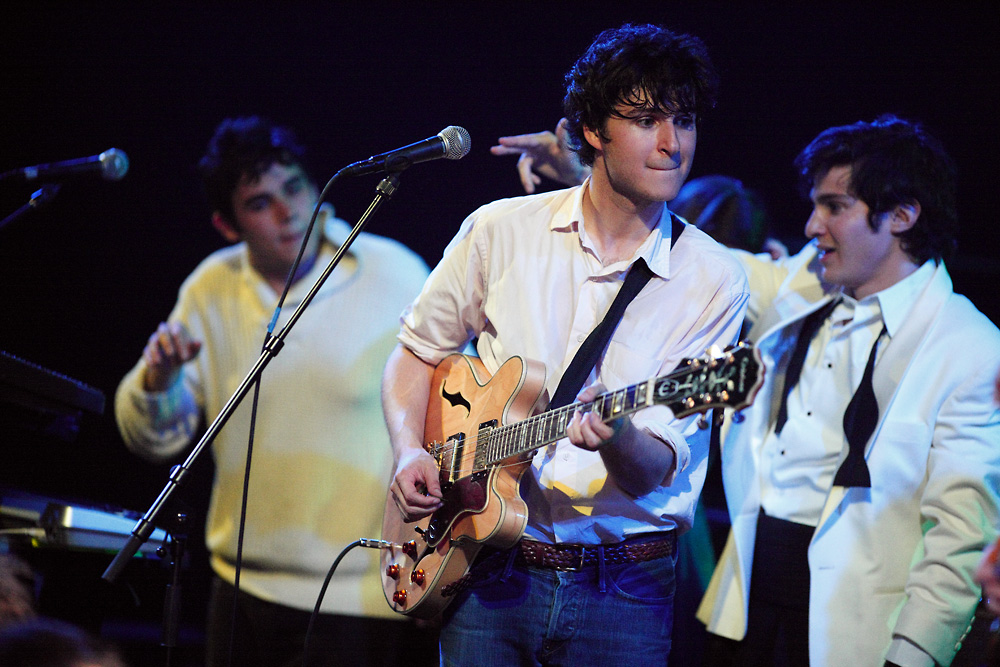 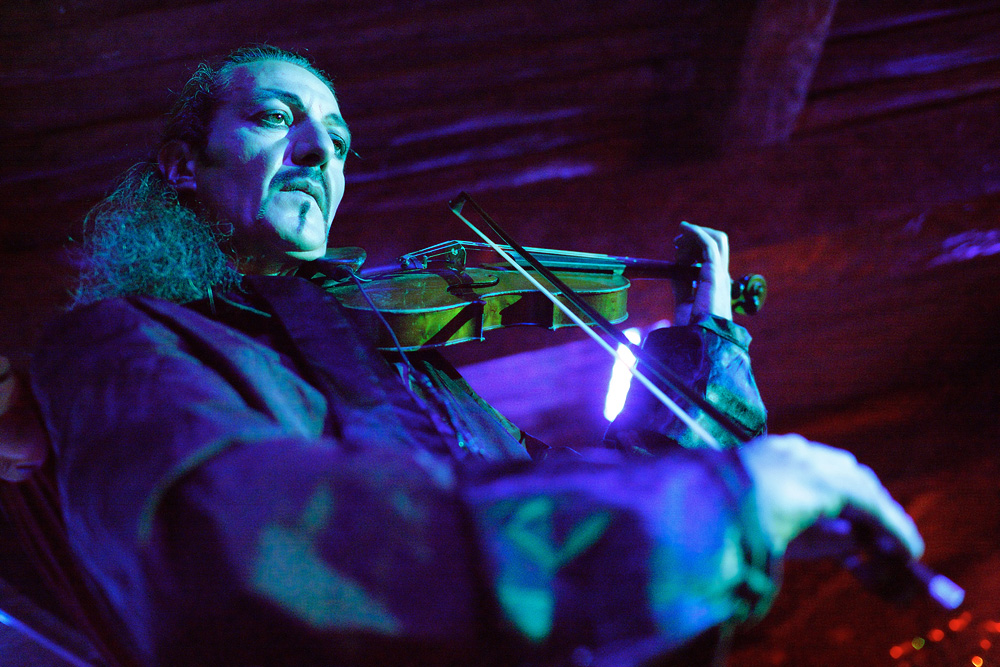 So what factors do affect low-light noise if sensel size doesn't?

The size of your sensor is the single biggest determinant of low-light performance. The worst current full-frame cameras are probably still better than the best current crop-framed cameras. The worst current crop-framed cameras are probably still better in low light than the very best point & shoot cameras. The exception to this is medium format, where a dwindling market has hurt investment and left the format a long way behind in the next factor, technological maturity.

Every couple of years things get much better. Small recent sensors can, in some cases, outperform larger old sensors. CCD and CMOS are different technologies and differ in low light performance too.

Some manufacturers have spent a lot of money tackling this problem, and a lead in low-light read technology can last for years at a time. Having said that, current 24x36mm cameras like the 1Ds Mk III, 5D Mk II, D3x, D3, D700 and α900/α850 all seem to have about the same low-light performance once appropriate noise reduction is applied (and they are interpolated to the same file size for comparison).

Is there a downside to jamming in more sensels?

Yes - probably: the smaller a well, the fewer photons it takes to saturate it. A saturated well determines the limit at which pixels turn white and hold no texture. This means that what you give up for sharper sensors is dynamic range and the ability to hold information in the highlights. Point & shoot cameras demonstrate this range limit often when highlights blow out. A less dense sensor sacrifices detail for increased headroom and dynamic range, even though it gains nothing in suppression of shadow noise. If people stated that they would prefer a less dense sensor in order to increase highlight headroom that would make sense, but they more often cite the fallacy that greater density increases shadow noise and poor low-light performance.

There are other people out there who 'get' this: The Joy of Pixel Density